Link to this page

Annunciation I
Order a Hand-Painted Reproduction of this Painting 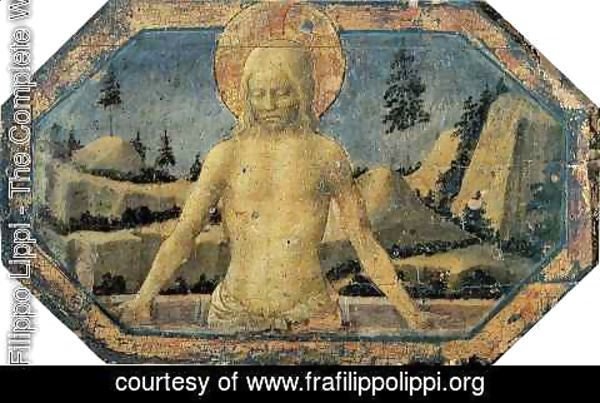 Fra Filippo Lippi was born in Florence to Tommaso, a butcher. Both his parents died when he was still a child. Mona Lapaccia, his aunt, took charge of the boy. In 1420 he was registered in the community of the Carmelite friars of the Carmine in Florence, where remained until 1432, taking the Carmelite vows in 1421 when he was sixteen. In his Lives of the Artists, Vasari says: "Instead of studying, he spent all his time scrawling pictures on his own books and those of others," The prior decided to give him the opportunity to learn painting. Eventually Fra Filippo quit the monastery, but it appears he was not released from his vows; in a letter dated 1439 he describes himself as the poorest friar of Florence, charged with the maintenance of six marriageable nieces. In 1452 he was appointed chaplain to the convent of S. Giovannino in Florence, and in 1457 rector (Rettore Commendatario) of S. Quirico in Legania, and made occasional, considerable profits; but his poverty seems chronic, his money being spent, according to one account, in frequent amours. Vasari relates some romantic adventures of Fra Filippo that modern biographers are not inclined to believe. Except through Vasari, nothing is known of his visits to Ancona and Naples, nor of his capture by Barbary pirates and enslavement in Barbary, where his skill in portrait-sketching helped to release him. From 1431 to 1437 his career is not accounted for.

In June 1456 Fra Filippo is recorded as living in Prato (near Florence) to paint frescoes in the choir of the cathedral. In 1458, while engaged in this work, he set about painting a picture for the convent chapel of S. Margherita of Prato, where he met Lucrezia Buti, the beautiful daughter of a Florentine, Francesco Buti; she was either a novice or a young lady placed under the nuns' guardianship. Lippi asked that she might be permitted to sit for the figure of the Madonna (or perhaps S. Margherita). Under that pretext, Lippi engaged in sexual relations with her, abducted her to his own house, and kept her there despite the nuns' efforts to reclaim her. 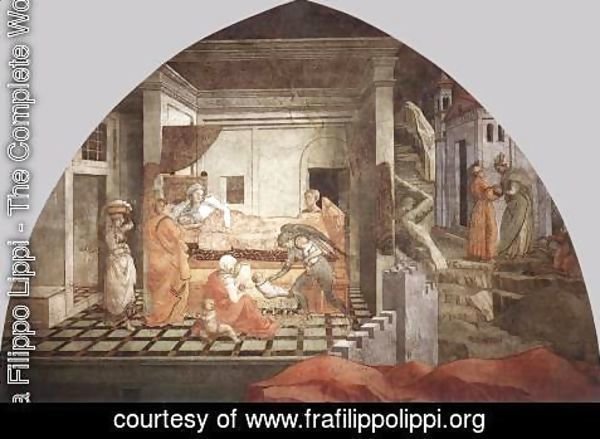 The result was their son Filippino Lippi, who became a painter no less famous than his father. Such is Vasari's narrative, published less than a century after the alleged events; it is not refuted by saying, more than three centuries later, that perhaps Lippo had nothing to do with any such Lucrezia, and perhaps Lippino was his adopted son, or only an ordinary relative and scholar. The argument that two reputed portraits of Lucrezia in paintings by Lippo are not alike, one as a Madonna in a very fine picture in the Pitti gallery, and the other in the same character in a Nativity in the Louvre, comes to very little; and it is reduced to nothing when the disputant adds that the Louvre painting is probably not done by Lippi at all[clarify]. Besides, it appears more likely that not the Madonna in the Louvre but a S. Margaret in a picture now in the Gallery of Prato is the original portrait (according to tradition) of Lucrezia Buti.

The frescoes in the choir of Prato cathedral, which depict the stories of St John the Baptist and St Stephen on the two main facing walls, are considered Fra Filippo's most important and monumental works, particularly the figure of Salome dancing, which has clear affinities with later works by Sandro Botticelli, his pupil, and Filippino Lippi, his son, as well as the scene showing the ceremonial mourning over Stephen's corpse. This latter is believed to contain a portrait of the painter, but there are various opinions as to which is the exact figure. On the end wall of the choir are S. Giovanni Gualberto and S. Alberto, while the vault has monumental representations of the four evangelists.

The close of Lippi's life was spent at Spoleto, where he had been commissioned to paint, for the apse of the cathedral, scenes from the life of the Virgin. In the semidome of the apse is Christ crowning the Madonna, with angels, sibyls and prophets. This series, which is not wholly equal to the one at Prato, was completed by Fra Diamante after Lippi's death. That Lippi died in Spoleto, on or about the 8th of October 1469, is a fact; the mode of his death is a matter of dispute. It has been said that the pope granted Lippi a dispensation for marrying Lucrezia, but before the permission arrived, Lippi had been poisoned by the indignant relatives of either Lucrezia herself or some lady who had replaced her in the inconstant painter's affections. This is now generally regarded as a fable, and indeed, a vendetta upon a man aged sixty-three for a seduction committed at the age of fifty-two seems hardly plausible. Fra Filippo lies buried in Spoleto, with a monument erected to him by Lorenzo the Magnificent; he had always been zealously patronized by the Medici family, beginning with Cosimo de Medici. Francesco di Pesello (called Pesellino) and Sandro Botticelli were among his most distinguished pupils. 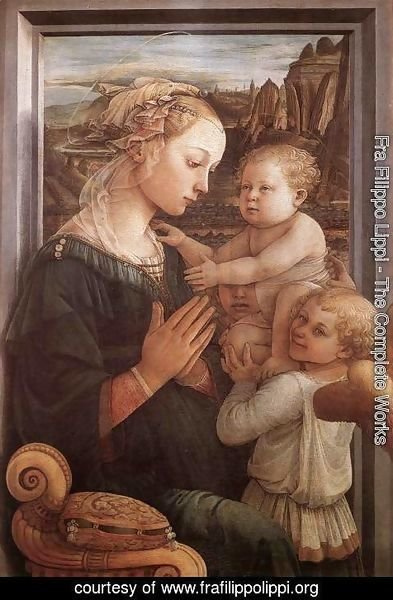 The altarpiece Lippi painted in 1441 for the nuns of S. Ambrogio is now a prominent attraction in the Academy of Florence, and was celebrated in Browning's well-known poem. It represents the coronation of the Virgin among angels and saints, including many Bernardine monks. One of these, placed to the right, is a half-length portrait of Lippo, pointed out by the inscription perfecit opus upon an angel's scroll. The price paid for this work in 1447 was 1200 Florentine lire, which seems surprisingly large.

For Germiniano Inghirami of Prato he painted the Death of St. Bernard. His principal altarpiece in this city is a Nativity in the refectory of S. Domenico - the Infant on the ground adored by the Virgin and Joseph, between Saints George and Dominic, in a rocky landscape, with the shepherds playing and six angels in the sky. In the Uffizi is a fine Virgin adoring the infant Christ, who is held by two angels; in the National Gallery, London, a Vision of St Bernard. The picture of the Virgin and Infant with an Angel, in this same gallery, also ascribed to Lippi, is disputable.

Filippo Lippi died in 1469 while working on the frescos Storie della Vergine (Scenes of the life of the Virgin Mary, 1467 - 1469) in the apse of the Spoleto Cathedral. The Frescos show the Annunciation, the Funeral, the Adoration of the Child and the Coronation of the Virgin. A group of bystanders at the Funeral includes a self-portrait of Lippi together with his son Fillipino and his helpers Fra Diamante and Pier Matteo d'Amelia. Lippi was buried on the right side of the transept.

The frescos were completed by Filippino Lippi, who also designed the funerary monument for his father. Although it was commissioned by Lorenzo de Medici it was not actually made until 1490 by an unknown Florentine sculptor. 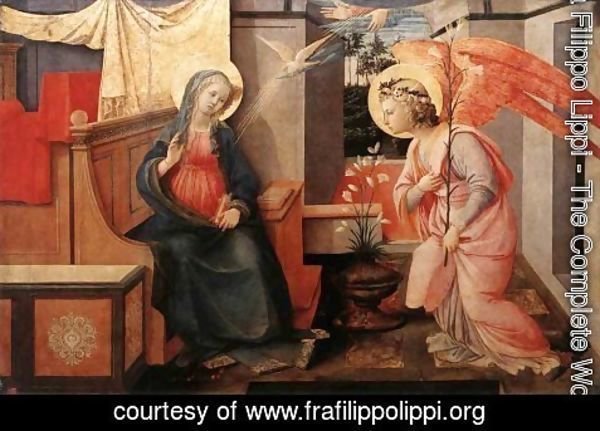 Filippo Lippi's pictures show the naiveté of a strong, rich nature, redundant in lively and somewhat whimsical observation. He approaches religious art from its human side, and is not pietistic though true to a phase of Catholic devotion. He was perhaps the greatest colourist and technical adept of his time, with good draughtsmanship. As a naturalist, he had less vulgar realism than some of his contemporaries, and with much genuine episodic animation, including semi-humorous incidents and low characters. He made little effort after perspective and none for foreshortenings, and was fond of ornamenting pilasters and other architectural features. According to Vasari, Lippi aimed to hide the extremities in drapery to avoid difficulties. His career was one of continual development, without fundamental variation in style or in coloring. In his great works the proportions are larger than life. (From Wikipedia)

Report an error on this page